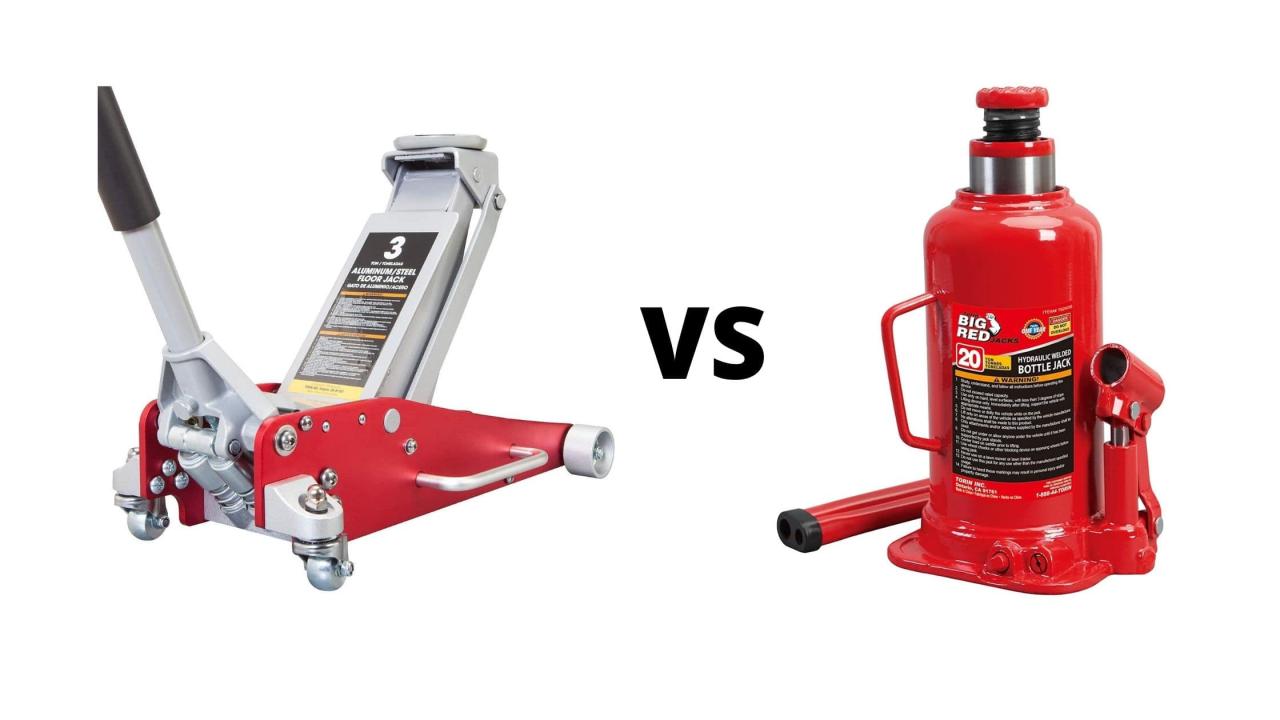 Being your own mechanic is not an easy task, mostly because fixing cars require a certain skill set and particular tools. And, jacking your car is the most obvious obstacle. To lift the vehicle and find and fix a problem, you will need a bit of help.

This is where a good jack comes in handy. There are several different types of jacks, but the most common ones are floor and bottle jacks.

They serve the same purpose, but they look a bit different and have several other differences, each one with its own advantages and drawbacks.

To help you find the right jack for the job at hand, we’ll explain what distinguishes bottle and floor jacks and list their pros and cons. Moreover, we’ll find out for what purpose you should use one or the other.

Differences Between Floor and Bottle Jacks

There are four major differences between bottle and floor jacks:

The first significant difference between bottle and floor jacks is the maximum capacity each of them provides, i.e. how much weight they can lift.

Interestingly enough, although they are much smaller, bottle jacks can lift much heavier vehicles, which is why they are very popular among truck owners. The increased capacity comes from the vertical design, allowing it to lift higher weights.

Also, with bottle jacks, you can usually raise your vehicle higher than with floor jacks. This is especially crucial when trying to jack high-clearance vehicles, such as large SUVs and pickup trucks.

In contrast, most floor jacks cannot lift as much weight as a bottle jack, due to the horizontal hydraulic design.

Additionally, the maximum lift height is generally lower, simply because the floor jack design does not allow it.

Because of the vertical design, bottle jacks’ footprints are much narrower, which leads to reduced stability in most cases.

For instance, a hilly terrain might be unsuitable for bottle jacks. Nevertheless, the tool is still quite useful on flat terrains such as pavement, asphalt, or cement.

When it comes to floor jacks, they are far more stable than bottle jacks thanks to their horizontal designs, larger footprints, and 4 wheels.

However, no matter which type of jack you choose, and no matter how stable it is, we still don’t recommend using any of these jacks without additional tools such as jack stands. No type of jack is stable enough to be solely relied upon when lifting a vehicle.

Now, when it comes to ease of use, there isn’t any set of special instructions required to use bottles and floor jacks. The process itself is quite simple. However, depending on the type and vehicle model, correctly positioning and safely setting up the jack can be quite tricky.

Bottle jacks are a bit harder to set up because they usually don’t come with wheels or handles, making them a bit trickier to position them under the vehicle.

Usually, this is not too annoying if you only use a jack occasionally. However, it can be quite irritating if you are a professional mechanic who needs to lift cars on a daily basis.

Conversely, floor jacks have wheels and a huge handle to pump faster, allowing you to quickly position and lift a vehicle without having to crawl under it to position the jack correctly.

When it comes to the size and ability to be transported, bottle jacks have a big advantage over floor jack models. Since their hydraulic system works vertically, they are much smaller, allowing you to easily put them in your vehicle and take them wherever you go.

Floor jacks, on the other hand, are (usually) much heavier and larger than bottle jacks, and because of its large handle, it requires a lot of storage space. If you own a mechanic shop or do mechanic work at home, it’s not really a big deal but floor jacks may not be the best choice if you intend to leave the jack in your car’s trunk.

Nonetheless, it’s not uncommon to find aluminum jacks these days that weight less than bottle jacks so they are easy to move around. However, that doesn’t make them smaller so they might still be too bulky to be left in the trunk.

How to Choose Between Bottle Jack and Floor Jack

Now, the ultimate question is, how do you choose between these two jack types, and which one is the right one for you?

Primarily, the choice will depend on your needs. If you simply want to buy a jack and leave it in your vehicle, just in case, then it’s probably better to get a bottle jack. Otherwise, if you are a professional mechanic, you might want to get a floor jack instead.

Your choice may also differ depending on the type of vehicles you need to lift. For high-profile vehicles, such as trucks and commercial vehicles, make sure to get a bottle jack. On the other hand, there are floor jacks that offer similar lift heights these days too.

Before starting to shop for a jack, make sure to correctly establish your budget and needs. Most people won’t need the most expensive jack on the market while professional mechanics using one on a daily basis might be better investing in a sturdy model that will last for years.

When shopping around, make sure to compare the weight capacity and maximum height of the jacks you are looking to buy. As a general rule, if you own a compact car or mid-size sedan, go with a floor jack. On the other hand, if you own a pickup or higher truck, go either with a bottle jack or a “high-lift” floor jack.

However, if you work on commercial vehicles such as cube trucks and anything bigger, there’s no way around it; you’ll need a bottle jack.

Jean-Claude is the Senior Editor at GarageSpot.com and eManualOnline.com as well as webmaster of TheMechanicDoctor.com, just to name a few. He has been a certified auto mechanic for the last 15 years, working for various car dealers and specialized repair shops. He turned towards blogging about cars and EVs in the hope of helping and inspiring the next generation of automotive technicians. He also loves cats, Johnny Cash and Subarus.