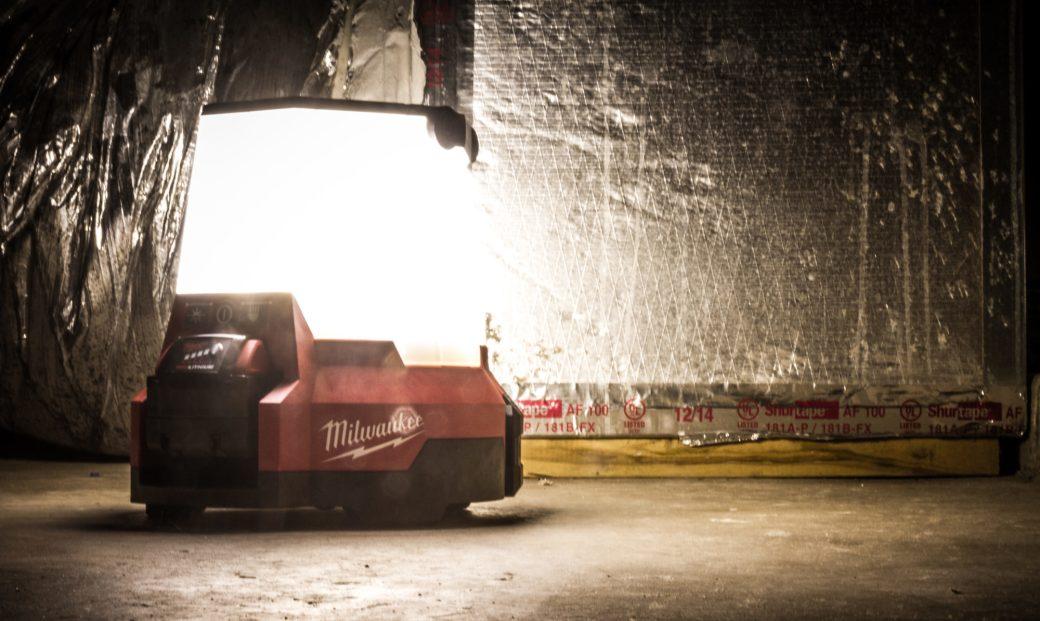 It's a bit bulky and pricey, but the M18 Radius LED Compact Site Light has some great built-in features and is SUPER bright (but adjustable). We love this thing, even for the DIYer.

One of the challenges we always have with flashlights, drop lights or LED stick lights with hooks and magnets is positioning them just right to illuminate our work area. Sure, these work lights certainly have a spot in our toolbox, but sometimes, we just need big, clean light.

There are lots of portable lighting solutions available today, and the field is only growing with the advent of high-output LED tech that doesn’t get hot, consumes little energy and lasts a very long time. No other light in today’s cordless lighting market, however, quite compares to the Milwaukee M18 Radius LED Site Light.

The Radius was really designed for the commercial job site. It’s marketed mostly towards those looking to replace cumbersome string lights and similar setups out on a construction site. But in the home garage, workshop or even out at the campsite, the Radius is very useful and lives comfortably with our other gear.

Let’s start with how the Radius looks—sort of like a scaled-down version of the top of a lighthouse. At 10½” tall and about 10¾” across its widest points at the base of the unit, the Radius is certainly much bulkier than what we would consider “portable,” so we’ll go with Milwaukee’s description and call the light “compact,” instead. It’s not going to fit in your toolbox, but neither would any single cordless light source comparable to the output and durability of the Radius.

The 180 individual LEDs that really make the Radius shine—36 on top and 18 on each of eight separate vertical LED strips in a 360° configuration—are shielded by a high impact polycarbonate lens that also doubles as a light diffuser for glare-free, balanced illumination. The LEDs feature Milwaukee’s TrueView HD technology, which produces a light temperature of [what we believe to be] about 4800k—a tad warmer than direct sunlight.

On the front of the Radius, there are three no-brainer squishy buttons with distinct iconography to control its various functions—power on/off in the middle, brightness control on the right, and the task lighting toggle button on the left, which we’ll discuss in more detail below.

The base of the Radius is made from a super-strong plastic adorned with Milwaukee’s legendary red and black brand colors. Beyond the buttons and also integrated into the base of the Radius are the M18 battery slot and two plugs for AC in and AC out. Under the base is a hook for hanging or securing the Radius.

Other than the two screws that secure the oversized and collapsible carry handle on top of the unit, the Radius has no visible hardware. The serviceable LED lens/diffuser is held in place with five sunken screws, accessible from under the base. There’s also a clear lens replacement available, which will increase the unit’s light output by about 20%, but also increase glare.

The Radius is one tough light. Seriously. In various demos we’ve seen, people were dropping it from 15′, pushing it down cement stairs, and even using the Radius as a jack stand of sorts under a tractor bucket (not recommended).

Since many of our audience here at GarageSpot.com would likely purchase the Radius for non-commercial use, most might treat it with somewhat kid gloves given its price point. But tools like this were meant to be used, so trust us when we say, you can use and abuse this light.

In fact, everything is either screwed in tight, spring-loaded (the AC in/out covers) or molded as one piece. Even the battery snaps in very securely. Unlike other lights and even other cordless tools we’ve used recently, the M18 battery is not going to pop out if the Radius is dropped.

Speaking of which, we did drop the Radius—onto flat cement from between 3′ and  7′ a dozen or so times. It bounced around a bit but came out unscathed.

With the light unplugged and powered by a battery, we showered it with water from a garden hose, too. No problems. It’s not submersible but the Radius does have an ingress protection rating of 5/4 (IP54), which means reasonable levels of dust and splashing water will not cause any damage.

When Milwaukee designed the Radius, they clearly considered how people would be using the light versus just making a really bright and durable light.

In the back of the unit, there are two plugs for what has been deemed pass-through power. One of those plugs accepts a standard AC extension cord, which will power the unit with or without a battery installed. Once unplugged, the battery takes over if installed.

On the other side, there’s an AC outlet allowing you to use the Radius to power other tools, or to daisy-chain up to 10 Radius lights in a row. That’s a really cool feature if you’ve got a few of these lights and need to illuminate a large area. Of course, you’ll need an extension cord in between each light, too.

We will note that, unfortunately, the Radius does not charge the battery while the unit is plugged in—you’ll need a separate charger for that. Also, the AC outlet is not powered when using just the battery to power the light—the unit must be plugged-in for the AC outlet to function. Hence, “pass-through” power.

On the bottom of the Radius, a 3½” metal rafter hook lifts out to hang the light from just about anything, including a rafter. This hook was brilliantly designed in that it can accommodate the width of a 2×4, has an indent to fit over smaller pipes, and is self-centering if what you’re hanging the light from suddenly becomes unbalanced. The hook also has a curve at the bottom, in between its eight mounting screws, so you can secure or hang the light with the included covered steel cable.

One great feature of the Radius is its task light mode, which allows you to completely turn off one side of the light—the button toggles which half. This is really useful when you only need to see what’s in front of you. We’re not sure if running the light in task mode conserves battery power. What we *think* we noticed that task lighting actually made the glowing side of the Radius brighter. It makes sense, but we can’t prove it.

After using the task lighting mode, though, one thing we really wished the light offered was a way to control the top LEDs, which are always on regardless of what mode the light is in. When the light is on the ground and you’re standing, those top lights are a bit hard on the eyes. And if you’re working under a car, having just the top lights on could be useful.

The Radius will also remember how you had the light setup when it was last on. So, if you’re using the rear task lighting option at medium brightness and turn the light off, it’ll be that way when you turn it back on again. That’s handy!

At full power, the Radius puts out a whopping 4,400 lumens with its pre-installed diffuser. At the medium setting, the light puts out a comfy 2100 lumens. And on its lowest setting, brightness is reduced to 1,000 lumens, but still plenty bright for nearby tasks.

As mention earlier, there is a clear lens available as an optional service part (e.g., the clear lens is not an option when you buy the light, but available separately from Milwaukee), which allows the full power of the LEDs to shine at a blinding 6,700 lumens.

The radius of the Radius (see what we did there?) on its brightest setting was about 15′ for us before the light dropped off quickly. But none of that really matters. This light is very bright and plenty powerful enough for working within 6′-10′ of it on full brightness. Bugs… they love it, too!

In the photo below, the Radius lit up the almost pitch-black large backyard nicely. The two-second manual exposure here is just a tad longer than what the camera wanted to do on its own so that we could be sure to capture exactly what we were seeing—this photo is very close to what we experienced.

We compared the light’s output [with just our eyes] when plugged-in and when powered only by the 5.0AH battery we used for our tests. There was no visible difference whatsoever, so you should see the full power of the LEDs whether the unit it plugged in or running on battery alone.

In our single test—indoors at room temperature—the Radius ran for about 2.3 hours on its highest/brightest setting with a fully charged and brand new No products found. battery installed. On its lowest setting, we achieved just under eight hours after recharging the same battery. Milwaukee recently launched its new 9.0AH battery, but we didn’t have one on-hand during our testing of the Radius light. When plugged-in, obviously, the light will run for as long as you need it to.

In October (2016), Milwaukee will bring its ONE-KEY technology to the Radius light, and that will be a different model altogether—this version of the light will not leverage ONE-KEY connectivity with those batteries installed. It’ll still look and function the same when controlled at the unit itself, but the tech inside will be a bit different to accommodate ONE-KEY connectivity.

We don’t have the ONE-KEY version of the Radius, but we do know—after seeing some Milwaukee demonstrations online—that you’ll be able to use the ONE-KEY smartphone app to control most functions of the Radius light. That’s super-handy if it’s hanging up high or you have multiple Radius lights daisy-chained together, as the app will allow you to control them all from your phone.

The ONE-KEY version is also dimmable, from what we saw in the demos, which offers more control than the three-button brightness settings on our version.

The Milwaukee M18 Radius LED Site Light is available at Home Depot, Amazon, and other popular tool outlets for about $299. The light does not include an M18 battery or charger, but will operate with AC power alone just fine.

Overall, we love this light. It’s a tad heavy, a bit bulky, and expensive compared to other LED work lights, but the amount of light the Radius emits, how that light is controlled, and the absolute toughness of the M18 Radius could quite possibly make this the last work light you’ll ever need… if you’re willing to shell out the bucks.

As for waiting on the ONE-KEY version of the Radius light to arrive: for those who just want/need one light, we’d say don’t bother waiting. The app will be useful for controlling multiple light setups and for controlling the light if it’s hanging high or otherwise out of reach. Beyond that, home users likely won’t use most of the ONE-KEY features.