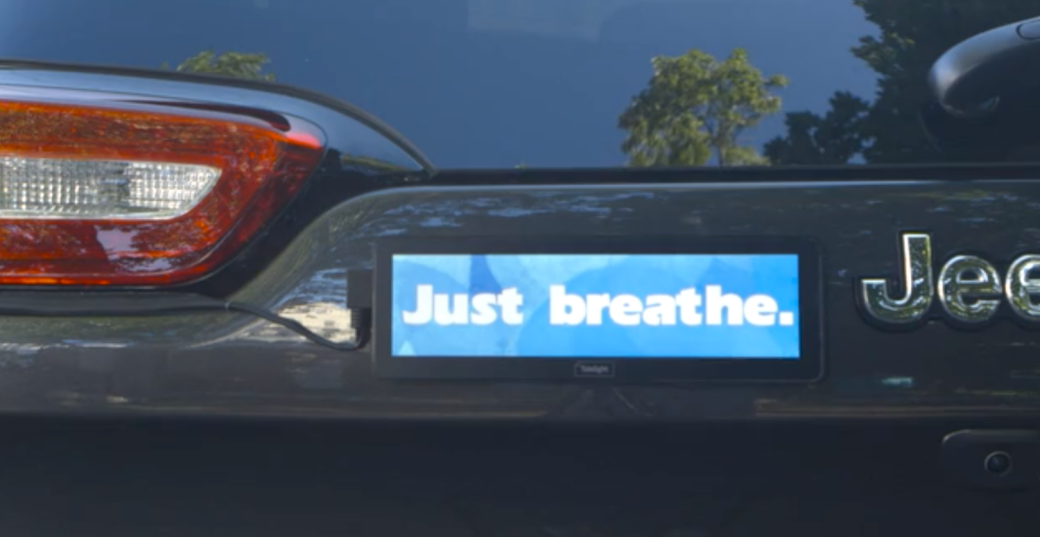 If you’re like me, you’re not a fan of plastering cheesy bumper stickers all over your vehicle. Facebook, with its memes alone, has done enough to ensure that we all know exactly where people stand politically and socially with very little tolerance. Sigh.

Alas, a company called Ultimation has developed the first digital bumper sticker to bring those social sentiments—and hopefully happier thoughts—directly to a bumper near you. Dubbed the Talelight, the 2” x 8” high-resolution color LCD display with high-capacity rechargeable battery and secure Bluetooth connectivity to its apps allows people to create, buy, and sell their own bumper stickers through Talelight’s online marketplace, and then share those messages on the road the same way they share updates on social media.

Here’s a teaser video from Ultimation:

The Talelight’s weatherproof LCD secures to the back of the vehicle using road-tested adhesive tape. A power cable is then routed to a power source inside the car. That cable is only used to power the unit, whereas the messaging features happen via secure Bluetooth and the Talelight app.

The cable and adhesive are a bummer for us. The unit has a built-in, rechargeable battery the company says is high-capacity, so why not just let us charge it and slap it on with felt-covered, super-powerful earth magnets? Perhaps there’s a technological reason; we haven’t asked yet.

One concern is that people may steal a sleek-looking LCD stuck on the rear of a car. The adhesives would make that difficult, but a truly wireless and magnetic solution means we could stow the device away if we wanted to, and switch which vehicle we’re using the device on. And while only a registered user (through the app or website) can operate their own unit, thieves won’t know that until it’s too late.

Still, the Talelight digital bumper sticker is a great idea, and we can see it being fun during sports seasons and the like. Talelights could also be used as mini-billboards on food trucks and those in the service or contracting industries to promote offers and whatnot to passers-by, which could be cool.

Talelight launched its Kickstarter campaign to fund its initial working capital and plans to begin shipping to users in September 2016 with a retail price of $149.99. Drivers who want to be one of the first to secure a Talelight unit can pre-order their device on the Kickstarter campaign page. The campaign ends August 1.